FILM-CONCERT AT THE AUDITORIUM OF LYON
THURSDAY, 20 OCTOBER 2022 AT 8PM

ACCOMPANIED ON THE ORGAN BY ADAM BERNADAC 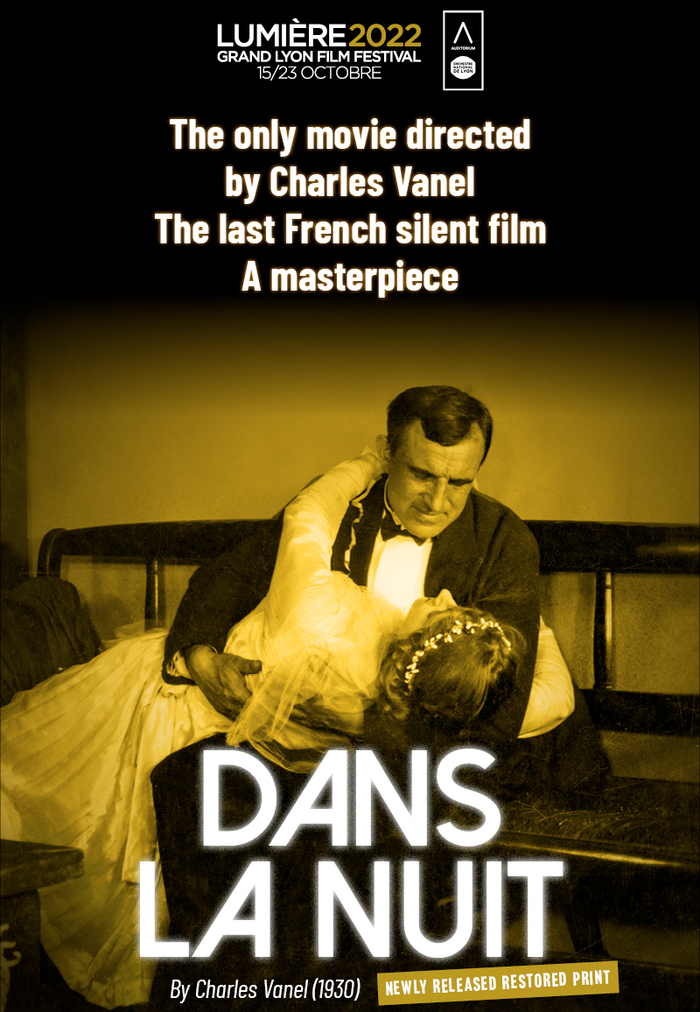 A restoration initiated by the Lumière Institute

The silent film event of the Lumière Film Festival! !

A great forgotten masterpiece, overshadowed by the arrival of talkies and unseen for decades, Dans la nuit returns to the big screen this autumn in a restoration led by the Lumière Institute for the silent film event of Lumière 2022, in collaboration with the Auditorium of Lyon.

“ I chose the wrong time to start filmmaking. The first film I directed, Dans la nuit,
was also one of the last silent films. The Parisian distributors and operators who produced
it  had absolutely no faith in talking pictures, saying,  ‘Be patient, this trend will not last’.
I was less optimistic than they were, and I was right. ”

The restoration of Dans la nuit was initiated by the Lumière Institute.

It was funded by the Centre National du Cinéma et de l’image animée, as part of the framework of selective support for the digitization of heritage cinematographic works.

The restoration was performed by Éclair Classics, made from the original flam negative preserved by the Cinémathèque française.
The project received support from the house of CHANEL,
Laurent Gerra and Michel Merkt.
The HFPA is affiliated with the Dans la nuit event.

We thank the teams of the Lumière Institute, the Cinémathèque française, and Éclair Classics.