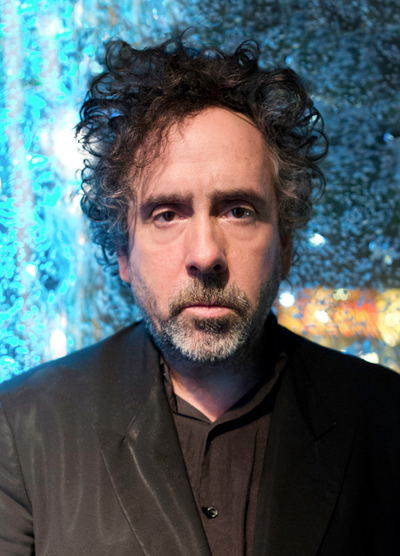 Tim Burton is a visionary, a master of styles and an artist, who has given the world of cinema a universe of rare coherence with an unprecedented impact on popular culture. From his first movies, Burton establishes his universe, skilfully blending his intensely personal expressivity with novelistic lyricism and pictorial references, traversing the entire history of art between the gothic and baroque, comedy, horror, romanticism or works tinged with melancholy. Beetlejuice and Edward Scissorhands, as well as his sublime interpretation of the classic comic book Batman, put him on the map. His work also includes uproarious comedies, musicals, fantasy films or horror flicks: Mars Attacks!, Dark Shadows, Sleepy Hollow. From Big Fish to Ed Wood, from Alice in Wonderland to Dumbo, Burton is always in search of the best way to tell a story, following the likes of Edgar Allan Poe and Lewis Carroll… It is impossible to dissociate Burton from the constellation of actors who have made up his galaxy: Johnny Depp, Helena Bonham Carter, Michael Keaton, Winona Ryder, Jack Nicholson, Danny DeVito, Michelle Pfeiffer, Glenn Close, Christina Ricci, Eva Green, Marion Cotillard… It is also thanks to the director’s long collaboration with composer Danny Elfman, who created some of the most iconic scores in contemporary cinema for him, that Tim Burton has become, over a 35-year career, a bona fide rock star of the big screen. With a great sense of pride, we celebrate his incomparable œuvre.

Edward Scissorhands by Tim Burton (1990, 1h45)
Edward is the creation of a brilliant inventor who died before he could attach his hands… In place of hands, he has sharp blades and scissors. A romantic love story charmingly portrayed by Winona Ryder and Johnny Depp. The latter would become the director's alter ego in his future work.
Halle Tony Garnier Sun23 3pm

Batman Returns by Tim Burton (1992, 2h06)
Evil men dressed as clowns and a mysterious "Penguin" wreak havoc on the streets of Gotham City... A marked satire of America in a world where everything is out of focus and driven by ambivalent characters.
UGC Astoria Tue18 7:30pm | Institut Lumière Thu20 10pm | Comœdia Fri21 2:30pm | Lumière Terreaux Sun23 5:30pm

Big Eyes by Tim Burton (2014, 1h47)
Margaret and Walter Keane are both painters. The couple encourage each other and show their work together... A tragicomedy based on the true story of the Keanes, starring Amy Adams and Christoph Waltz.
Pathé Bellecour Tue18 4:15pm | UGC Astoria Thu20 5:30pm | UGC Confluence Fri21 11am

Dumbo by Tim Burton (2019, 1h52)
Holt Farrier, a former circus star, is entrusted with the task of caring for a baby elephant with gigantic ears... A satire of showbiz society starring Colin Farrell, Danny DeVito, Michael Keaton and Eva Green.
Comœdia Sun23 10:45am (in French)

The Nightmare Before Christmas by Henry Selick (1993, 1h16)
Jack, the Pumpkin King, is weary of organising Halloween. In the forest, he discovers Christmas Town, and envies the joy of that land... A project created and developed by Burton, a musical that revolutionised stop-motion animation.
Halle Tony Garnier Sun16 3pm (in French) | Pathé Bellecour Sat22 10:15pm